While sitting at the Eagle River Campground on Saturday afternoon, July 23, 2022, we decided to replace our front door window.

Back in Grande Prairie when we had the power tongue jack replaced we also picked up some other items from the RV store. These included something we’e wanted for a while; a new Thin Shady RV Front Door Window to replace our standard frosted glass window.

When we first purchased Nomad the frosted glass window was one of the things we knew we wanted to change. You can’t see through it, other than a general shape or shadow. If someone knocks on your door you can’t see who it is unless you run to look out the kitchen window or run to look out the bedroom window. And even then you may not be able to see them completely. So while the frosted glass might be nice, it’s a security issue because the only way to see who is at your door is to open the door. Not very safe.

The other major issue is light! If we’re parked facing north or south, then the early morning sun or the setting sun comes blazing through even the frosted glass. And as we discovered in the Alaska during this time of year, light is coming through even at 2 am. Neither of which is conducive to sound sleep. The Thin Shady RV Front Door Window is tinted and tempered, as well as having a shade that you can raise or lower to allow as much or as little light in as you wish.

The Thin Shady RV Front Door Window is a DIY project that any RV owner can install. It’s pretty easy but it DOES take two people. Luckily we have two of us here, lol.

All together, it took us less than 45 minutes to remove the old window and install the new one and we are both happy with the results. Now we can see out to see who is at the door and we can use the shade to block light from coming in. The tinted glass makes it impossible for someone to see inside, even if they press their face right up against the glass. 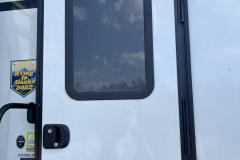 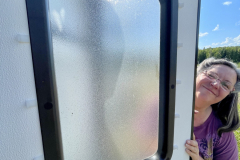 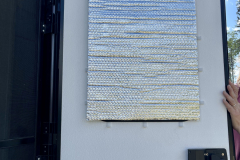 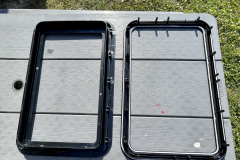 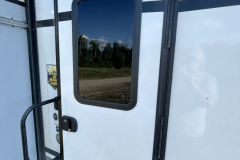 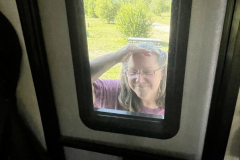