Thursday morning, June 30, 2022, we arose early (for us, lol), had a large, nutritious breakfast (thanks Cindy!) and headed out to the Denali Visitor Center to go on a three-mile long Ranger-led hike in the park.

One of the things we really enjoy about visiting our national parks is taking part in hikes and “talks” by the rangers on staff. They are always so knowledgeable about the specifics of the park they are serving in that we always learn something we didn’t know before or have some knowledge we did possess validated during these hikes and talks. The Rangers at Denali have been exceptional.

But first, on the way to the Visitor Center, we spotted another cow moose peacefully enjoying her breakfast on the side of the main road. Cindy got some more wonderful photos.

Then it was on to the Ranger Hike.

I was surprised at how many people there were gathered for the hike, and so was the ranger. He said it was the largest group so far this season and I counted 45 men, women and children. The hike and talk were based around the theme of what the part of Denali looked like in ages past and what it might look like eons into the future. We learned about the ground, the rocks, the trees, the flowers, the insects, the animals and the arrival of man in the valley and across the mountains and what all of that might look like centuries from now as we hiked. With such a large crowd I was afraid we might miss something the ranger said, but for a little guy he had a very strong and loud voice.

We also learned about Maurice Morino, an early entrepreneur in the nascent days of the park, who had an inn and restaurant just a few steps from where the train station used to deposit visitors. Food was not always able to be kept fresh and many people suffered from food poisoning after dining at his establishment. The ranger was kind enough to point out that the restaurant at the park today is named the Morino Dining Hall and we all got a good laugh at the joke.

Finally, after a late dinner, we walked down to the amphitheater for a Ranger Talk about “Land of the Midnight Sun: Top of the World Astronomy” and, again, there was a very large crowd. We took Bella with us to this talk and she was the star of the show with people coming over to pet her and say “Hi” before the talk. But the funniest point was about halfway through the talk when she suddenly spotted a rabbit go racing by just at the edge of the open amphitheater. She jumped up from her prone position on the ground and began to race toward the fast-departing rabbit. Cindy had her leash and was momentarily startled but held on and pulled her back and we all had a good laugh at Bella watching the rabbit race away, knowing she wanted to chase it down in the worst way.

This is our last night in Denali, but we still have at least one more thing to do tomorrow morning before we pack up and leave. 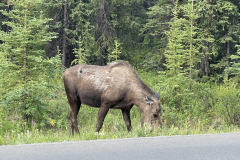 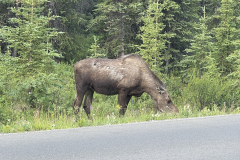 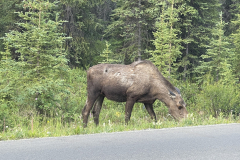 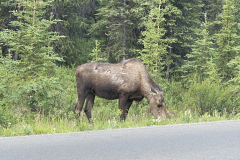 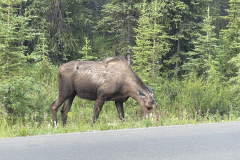 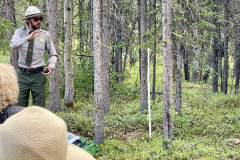 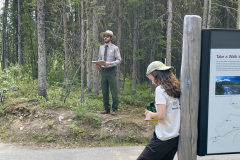 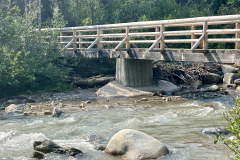 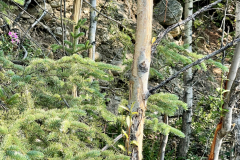 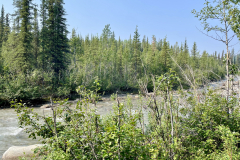 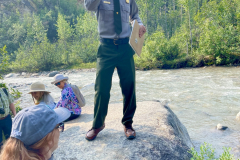 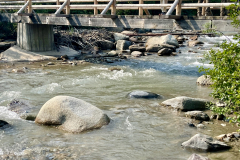 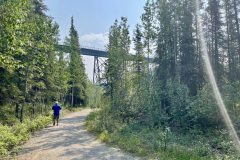 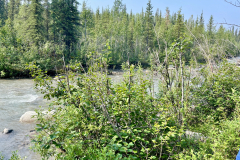 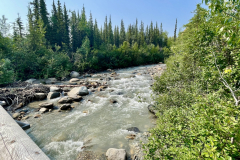 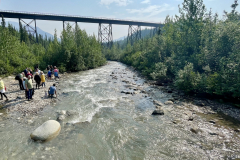 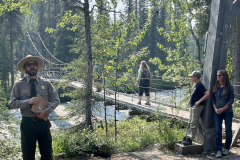 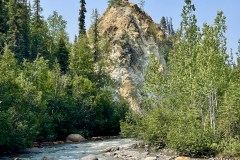 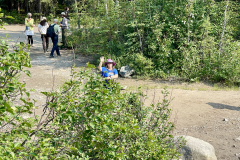 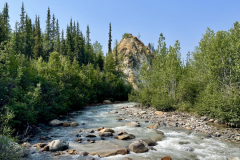 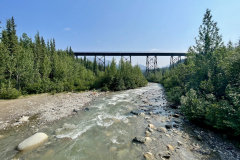 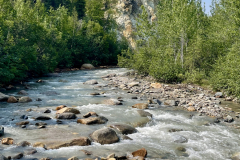 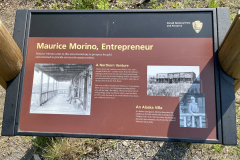