Both of us have wanted to visit the 49th state and three years ago we planned a cruise to Alaska only to have to cancel it due to the COVID-19 pandemic. Almost two years ago, when we decided it was time for me to retire, we discussed buying an RV the following year and using that to travel to The Last Frontier. Last year we bought that RV, I retired and we began earnestly planning the route and when we would drive to Alaska.

So for three years we have anticipated seeing Alaska and for a year we have been eagerly anticipating making that trip a reality. We studied all that we could, joined groups to learn more, watched videos to learn even more. A year ago we weren’t even sure that Canada would open their borders to people who wanted to drive to Alaska, due to COVID-19. But we made sure we stayed vaccinated and boosted and hoped that the pandemic would lessen in severity enough that Canada would allow road traffic through. Thankfully, it did and they did.

And now, as we look back on the month we spent in Alaska, it is with hearts and minds that are SO glad we made those memories for ourselves! I’ve tried to keep a written record of all that we saw and did. But there are still so many things, maybe little things, that didn’t make it into the blog but we will remember fondly…and some not so fondly, lol!

So that Saturday morning was a bit sad, I think, for both of us. For us, this truly was the trip of a lifetime. One of the things we were happy to discover when we first met was that we could travel well together. Sadly, not all couples can say that. But we both love to travel and especially to travel together. And even though we have travelled to other countries and many states, this trip to Alaska was a special trip that we both had been anticipating for a while.

Now, it was coming to an end.

We tore down our set-up, packed everything away and set out from Tok to drive 90 miles to the Canada border crossing. We approached the crossing and found a long line of vehicles waiting to go through a single lane. Maybe Alaska was reluctant to see us leave as well? It rained the night before beginning at about 10 pm and we told each other then that Alaska was crying because of our departure, lol.

In any event, we ended up waiting almost an hour to get to the single Canada Border Services Officer. While we were waiting we were entertained by an unkindness of ravens. I am assuming that people stuck in this kind of line at the crossing usually throw them some kind of food or scraps, so they make it a habit to gather here and squawk for food.

When you approach the check-in kiosk there is a large sign that instructs you to wait at the line (about 20 feet away from the officer at the kiosk) until the officer directs you to move forward. The man in the car in front of the car in front of us did not do this and the two young women in the car in front of us followed his bad example. The CBSO read both cars the “riot act” (rightfully so) and we could tell she was abrupt and demanding when the two young women’s car reached her (she may have been with the previous driver, it was just too far away for us to tell). Thankfully, when we pulled up she was just as nice as could be. A few questions asked and answered, a look at our passports and we were through.

We stopped at Beaver Creek, right across the border, for gas and wanted to by some groceries (some things like milk, eggs, chicken and dog food cannot be brought into Canada) but there were no grocery stores in the small town. Cindy went into a small hotel to see if they had a store section and they did not but the owner sold her some eggs and milk from her hotel kitchen, which was kind of her and kind of neat. And Bella lucked out because she got to eat scrambled eggs with bacon bits for dinner.

We only drove about 130 miles that day. The road out of Alaska and into Canada’s Yukon Territory was in such bad shape that even though I drove about 6 hours, I could only average about 23 miles an hour due to the potholes, frost heaves, road construction and gravel sections. We found a nice Rest Area pull-off and parked for the night. 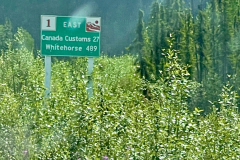 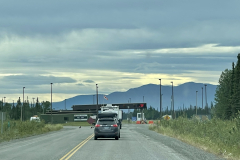 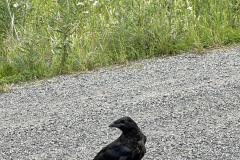 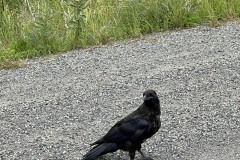 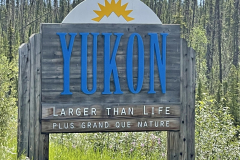 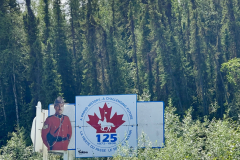 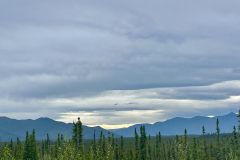