Friday, July 15, 2022 we arose early, tore down our set-up and drove 253 miles from beautiful Valdez, Alaska to…well whatever Tok (pronounced “Toke”), Alaska might be described as. Most notably, Tok is the first larger town you come to after crossing the border into Alaska and the last one as you leave Alaska to cross into the Yukon Territory of Canada.

Because, yes, this was our last night in Alaska.

As with most road trips in Alaska, what should have taken a little over 4 hours instead took close to 6 hours due to road repair construction or roads that NEEDED repair. We also had an almost 35 minute wait in line for gasoline at Glenallen, where Cindy was also charged more than $8 for a snack-size bag of Fritos and a coke to settle her stomach.

But, as usual, the scenery was gorgeous during our drive. There is no denying that Alaska is a beautiful state.

We rolled into Tok and drove to the “RV Park” we were going to spend the night at. It’s always fun when you’re assigned a specific site and show up to find someone else already in that site. And no one staffing the “office” (a small, little hovel next to the laundry room and bathroom) either. Cindy called the number in the email confirmation and the guy’s response was, “Oh, just go to one of the next ones with a reserved sign on it, that will be fine.” OK dude. Hope we weren’t taking SOMEONE ELSE’S assigned spot.

Anyway, the place wasn’t all that bad…for one night.

We got set up and drove over to our favorite restaurant in town (only because it’s where we ate when we arrived in Alaska almost a month ago and loved it), Fast Eddy’s. Their hamburgers are delicious! And apparently they have good pizza too as we saw several people picking up pizza boxes to go during both visits. We were going to split a burger, but once we got there and smelled them cooking our stomachs overruled that decision.

After dinner we drove to a gas station and filled the tank, then over to a grocery store bought a few victuals. AFter returning to Nomad we fed Bella and then took her for a walk so we could all walk off our meals.

I fleetingly wondered why the park was called “Alaska Stove’s Campground” when we first arrived, but then found out why as we walked. Their marketing push is to rent out room that has been modeled to look like a giant stove. You can actually sleep in a stove. I kid you not.

We did a little reading and hit the sack at a decent hour. Tomorrow would be our last day in The Last Frontier. 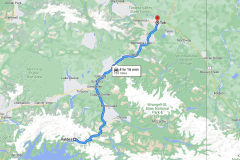 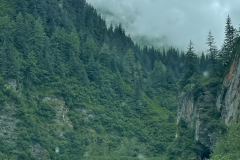 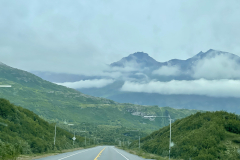 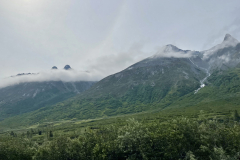 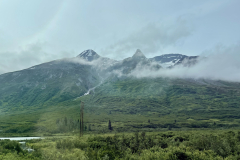 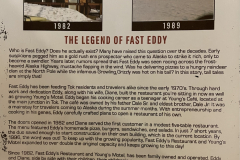 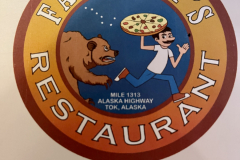 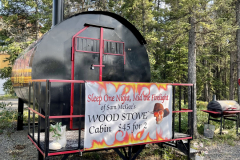 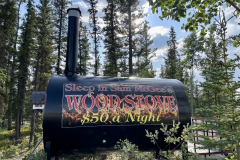 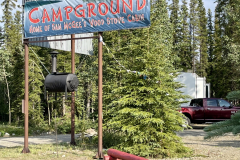