Sunday morning, August 7, 2022 we packed everything up, tore everything down and prepared to leave Canada. Milk River, where we were staying for our last few nights in The Great White North, was only about 15 miles from the Canada/U.S. border crossing in Coutts/Sweetgrass. But, before we could leave Milk River, we had a very important task to perform.

Both Voyager and Nomad were filthy with coatings of dust, dirt, and mud following our two months in Alaska and Canada. We had to travel so many dirt roads, gravel roads and muddy roads that I felt like it would be an exercise in futility to wash either of them until we were pretty much done with that kind of travel. So, as I mentioned in this post, we had seen a Truck/RV Wash at the north end of Milk River when we came into town. I asked the campground host if it was open on Sunday and she assured me it was. So, my duty was clear.

Except I thought the wash was an automatic drive through like we had seen on the road in many places. Turned out it was the kind with the pressure hoses/nozzles in a bay that you use to wash, rinse, and (if you are so inclined, I was not) wax your truck and travel trailer. It took me 45 minutes to wash and rinse all the flotsam and jetsam off both vehicles. Some of that mud was caked on like concrete on the lower front of Nomad and the grill of Voyager looked like a bug cemetery. Even then, I could still see some traces of mud that just wouldn’t scrub completely off this time, which was why I passed on waxing.

I also shared with Cindy how my brother and his friend, when they were young adults on their own, would go to car washes like this at 2 am when no one else was around and take their showers, but she said there was no way she was doing that, even if the bay doors were closed, lol.

Then it was a short 20 minute drive to the border crossing. The place was packed and we were in line for an hour before arriving at the checkpoint. To amuse ourselves, Cindy and I played and sang Neil Diamond’s “Coming to America” as we inched forward ever so slowly in line. And yes, if you were paying attention to the title of this post, it’s a play on words of the chorus to The Beatles’ satire song, “Back in the USSR”. Go ahead, sing the title to that tune.

When we finally reached the checkpoint it was all pretty cut and dried. We found ourselves spending less than 2 minutes with the Border Officer and then we were on our way. Back in the land of miles instead of kilometers, gallons instead of liters, and Fahrenheit instead of Celsius. Heading to our first stop back in the U.S., Devil Creek Campground near Essex, Montana in the Flathead National Forest. More importantly to us, it was close to the reason for our visit to this area; Glacier National Park.

We crossed more prairie land (which Cindy was getting bored with, lol) but soon we were entering the mountainous area that surrounds and makes up Glacier National Park. We found our campsite and got set up for a week’s stay. While we were setting up we heard a couple of gunshots and thought there were hunters nearby. Almost as soon as we had finished setting up the camp host came by and introduced herself and let us know that there was a bear nearby. A bear that had lost its fear of humans and was making itself a nuisance. The gunshots we heard were from her husband shooting rubber bullets at the bear in an effort to drive it off. It may have worked as we never saw a bear during our stay, but we also made sure to keep all our foodstuffs locked inside Voyager or Nomad.

The site was nice, pretty level, clean and spacious. We had a nice trail down to the raging Devil Creek about a half-mile behind our site and there was a nice horse trail on the other side of the campground that Bella really seemed to enjoy. Except when she acted like something had been or was there. This was the area where the camp host had shot rubber bullets at the bear, so we assumed Bella was getting its scent…and didn’t like it, lol!

All in all, we were happy to be back in the U.S. and ready for our next adventure. 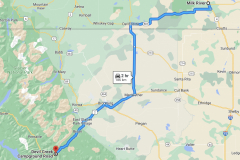 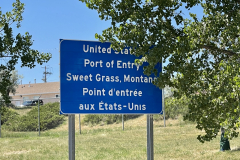 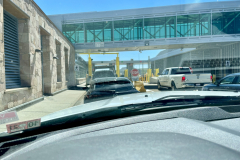 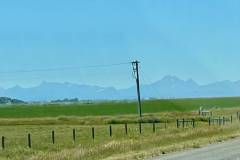 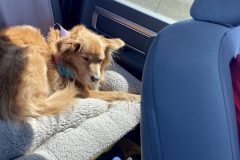 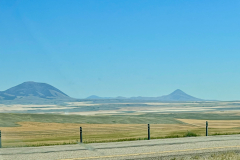 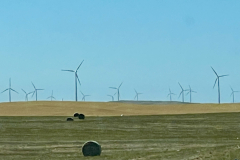 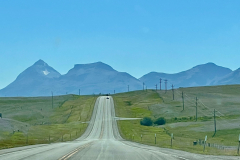 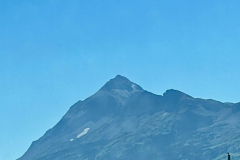 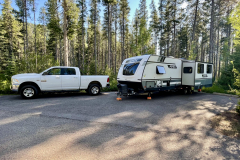 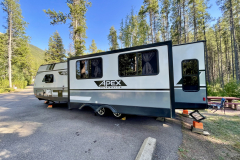 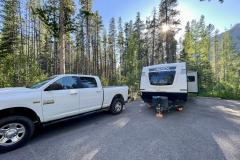 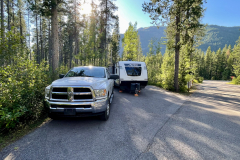 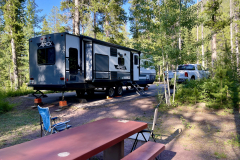