After our two short nights at the Alpine North Campground in Caribou-Targhee National Forest, Wyoming we packed up on Tuesday morning, August 30, 2022 and drove 217 miles to spend a week at the Firehole Campground in Ashley National Forest. Firehole is located about 29 miles outside of Rock Springs, Wyoming in the Flaming Gorge National Recreational Area.

We stopped in Rock Springs first to get some groceries for us and gas for Voyager. I was hoping we wouldn’t have to drive back after we got to our campsite, but since there was no connectivity at Firehole we did end up driving back into Rock Springs a couple of more times over the week we spent there. Cindy also took the opportunity to pick up some cross stitch supplies and materials for the different projects she’s been working on. In addition, I volunteered to drive into Rock Springs to do our laundry, which allowed me to enjoy lunch at a Chinese restaurant (a cuisine that is NOT Cindy’s favorite).

The Flaming Gorge National Recreation Area is made up of more than 207,000 acres of gorgeous red and yellow canyon walls, dry, green close-to-the-ground plant life, and beautiful flat-surface lakes, rivers and, of course, the 91-mile long Flaming Gorge Reservoir. The Green River is nearby also, separated from the reservoir by the Flaming Gorge Dam. Cindy and I keep toying with the idea of getting a kayak or canoe, since we have been camping near bodies of beautiful water. Neither of us fish or enjoy eating fish, but we would enjoy paddling around a lake or down a gently flowing river.

Firehole Campground was a starkly beautiful campground, surrounded by towering walls of almost rust-colored rock that were sometimes topped by magnificent stone formations. It lies in a high desert environment with lots of sagebrush and some scattered Russian Olive Trees, and sits on the far northeastern shore of the Flaming Gorge Reservoir. From our site there was water on three sides of us that we could see if we walked to the edges of the campground and looked down. We did a lot of walking/hiking while here, though not up into the rocks themselves. Bella certainly enjoyed exploring, but we had to keep an extra close eye out for rattlesnakes we were warned about.

This was the first campground we had been to that had double campsites. If you look at the photos, you can see that your neighbor would be in the half of the spot you were not. Basically no less than 6 feet apart. It was not an arrangement that Cindy or I would have liked and fortunately, though the site next to us had a reservation, they never showed up and so we had no close neighbors during our stay. The camp hostess told Cindy that this campground was built more than 30 years ago when RVs were not in the widespread use that they have been the last few years. She said they keep asking for the campground to be upgraded and rebuilt and the sites converted to single-unit use, but that hasn’t happened yet.

We had one other unintended adventure. One evening just as we were about to eat dinner, a young man pulled up in his car at our site and asked if I’d be willing to use my truck to help pull out a guy whose own truck was stuck in the sand at the edge of the reservoir. He had been fishing in the area and saw the other guy’s truck get bogged down. He tried to help him but could not push him out and his car was not powerful enough to pull him out. I followed him about 3 miles to where the guy was stuck, parked on the road and walked down to the water’s edge to test the thickness of the sand. His truck’s rear wheels were almost completely buried. The guy had been driving along the edge without any trouble and suddenly his rear end sank and stuck.

I walked along the area where I planned to pulled up beside and to the left front of him to pull him out and away from the edge of the shore, checking the condition of the ground. It was thick and covered in smaller rocks and seemed more than sturdy enough to bear the weight of my truck and allow me to pull him out at an angle.

But it was not.

As I pulled up alongside and to his left, my passenger-side front tire sank into the mud you could not see from the surface. We all tried to push, pull and rock Voyager back and forth to get loose, but to no avail. The guy that asked me to come help said that another guy was supposed to be coming after he finished something he was doing, and he would go check on him. I asked him to stop by and tell Cindy I was also stuck and would be back as soon as I could get unstuck.

He returned about 20 minutes later with the other guy and his truck. This second guy stayed on even firmer ground and was able to pull me out backwards. Then he stayed on that firmer ground that I was headed to and tried to pull the other guy out. But the first guy was SO stuck that even with his truck pulling and the rest of us pushing the stuck truck from behind, both the tow straps broke. The guy who asked us to help said he would go into Rock Springs to get some friends that had a tow truck and come back. Myself and the second guy could offer no more help in getting him out and so we wished him the best and left. As I was leaving I asked him if he had any water to drink and he did not so I gave him a couple of bottles we keep in the truck.

Other than that, we really enjoyed our stay at Firehole Campground and were looking forward to our next campsite, the Yampa River Campground in Colorado.

Thanks for following the Wandering Wetheringtons! 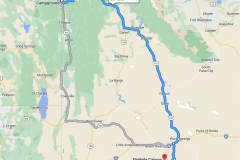 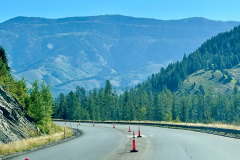 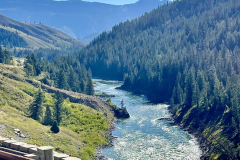 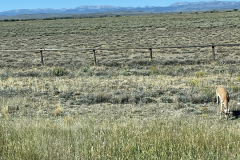 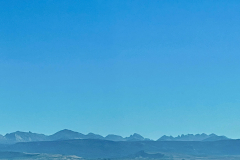 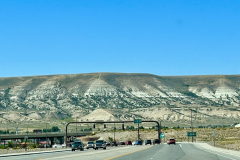 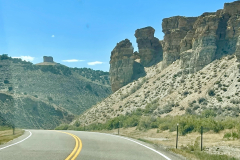 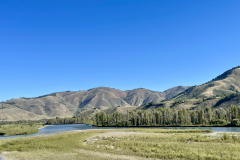 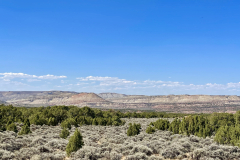 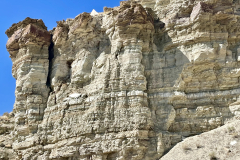 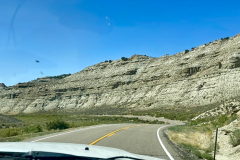 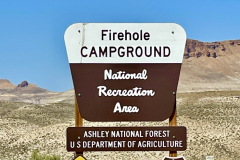 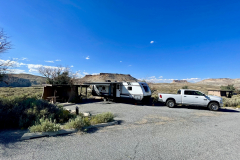 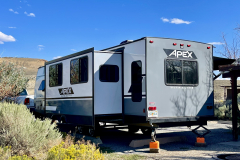 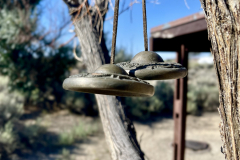 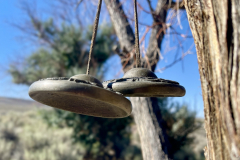 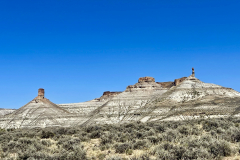 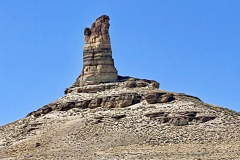 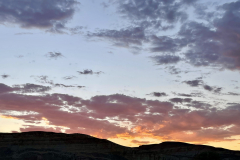 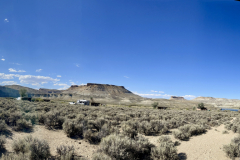 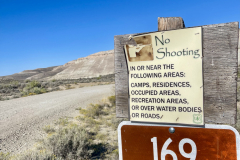 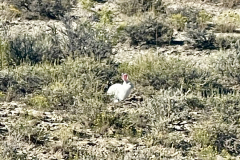 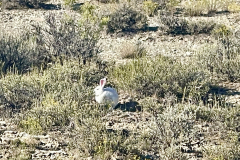 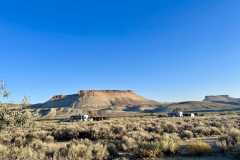