Saturday afternoon we stopped at a pullout. Later in the evening it was raining and Cindy discovered rain leaking in over the window behind my recliner on the slide-out. Removed the valance looks like water is seeping in from outside at the edge of the slide-out. I removed the valance over the window but there wasn’t much I could do about while it was raining. I kept waking up throughout the night to check on it.

From Sunday, July 17 until Thursday, July 21 we drove approximately 1, 273 miles (2,050 kilometers) through Canada, a lot of that on the ALCAN that we had already traveled to get to Alaska. But from Dawson Creek, the beginning of the ALCAN, we began traveling new territory as we made our way through Eastern British Columbia into Western Alberta. Each day we averaged 250 miles of distance and then would find a rest area or pull-out to stop at and spend the night.

Here are a few highlights of those days:

Sunday July 17, 2022 we drove about 250 miles to Whitehorse where we got some groceries (most importantly, dog food for Bella) and stopped at a rest area 24 km from Whitehorse on a river. Thankfully, no mosquitos. At about 4:30pm, since there had been no further rain and the top of the slide-out was dry, I got out the Eterna Bond roofing tape I brought for an emergency and re-sealed the slide-out with it. What ticked me off is that I just re-sealed that slide-out edges with silicon in Washington State a couple of months ago.

Monday, July 18, 2022 we stopped at a nice rest area 2 km from Fireside, BC. Earlier we had passed a couple of herds of bison. After we were set up I took Bella for a walk in the grass to the east of us. She kept stopping and sniffing the air and I couldn’t figure out what was bothering her until we turned around and walked back toward Nomad. That’s when I saw a huge, solitary bison (usually these are males) across the road and maybe 500 feet west of us.

Now we had a single bison for a neighbor for about 3 hours or so. Cindy was delighted!

As I walked back to Nomad and stepped to the side facing away from the highway so I could go in the door, I heard a vehicle pull up on the far side and a door close. Sometimes there are several of us that will stop for the night at a rest stop, but my Spidey-sense started tingling because this person hadn’t pulled to the far edge but rather on my blindside. I still had Bella on the leash and she was alerting on the area in front of the truck (which was still hitched to the trailer) and I heard footsteps from that area as a young guy stepped around the front of the truck.

I automatically and instinctively turned my head to look to the rear of the trailer in case he was just distracting me while someone snuck up behind me…but no one was there. Old habits are hard to break, even when you’re retired and enjoying life. Or maybe especially when.

“I was wondering, which way did you come?”, the young man asked.

“Oh, uh, we just came from that way (to the east) and passed a gas station that was closed about 10 miles back (so American, not Canadian). I wondered how far the next gas station was from that direction, or if I should turn around and spend the night at the closed station until they open tomorrow morning.”

“Yeah, the nearest gas station back that way was (calling out to Cindy through the screen door while I kept looking at him and behind me) ‘Honey how far was that station we passed?'”

“So, if you don’t have enough gas to make it that far, I’d turn around and go back to the closed station and wait for them to open”, I said a bit more nicely, deciding that he was not a threat to me or my girls.

And yeah, if I had had a gas can with gas I would have offered it to him. But Cindy and I decided when we started the Alaska trip that we would always fill up our tank when it got to half-empty so we wouldn’t have happen to us what was happening to this young man. We didn’t have a gas can with us because we planned to not need one.

He thanked me, got in his vehicle and turned around to head back the way he came. (When we passed that station early the next morning, his vehicle was parked there, waiting for the station to open).

After he left I set about doing a few more things around the truck and trailer. Then I made a huge mistake…and broke our tongue jack.

I thought the tailgate of the truck was up and latched, but it wasn’t and it crashed down onto the tongue jack, breaking the switch. Now we can’t take the trailer off the hitch unless we figure out how to do it manually or get a new tongue jack. No internet or even cell phone connectivity so can’t find out how to do it manually. Hoping we’ll either get internet in the next day or find a place to get a new tongue jack in Dawson Creek in 2 days.

Tuesday July 19, 2022 we drove 292 miles and stopped at a rest area just north of Prophet River. No internet…again.

Wednesday, July 20, 2022 we drove from Prophet River to Grande Prairie with a stop at Dawson Creek, the beginning of the ALCAN. Before we left I finally found the secret opening you use to crank the tongue jack up and down, but it is not something I want to do all the time. We were hoping to find a replacement tongue jack in Dawson Creek, but no luck. While I was on the phone with the maker, Lippert, to see if they could tell me what part number I should be asking for Cindy was on the phone with a place in Grande Prairie (further along our planned route) that had them in stock.

We make a great team, especially when I do what she tells me to do.

We now had an appointment Thursday morning, July 21, 2022 at 9am to have a new tongue jack installed by McGovern RV and Marine Supply in Grande Prairie. In the meantime, we drove on from Dawson Creek to Grande Prairie on Wednesday afternoon and parked in a Walmart parking lot for the night so we would only be a few minutes away from McGovern’s to get our replacement tongue jack installed the next morning. 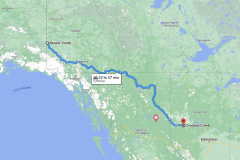 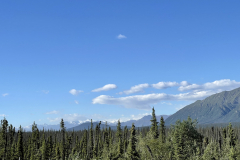 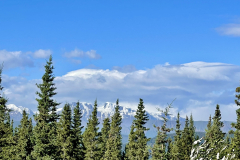 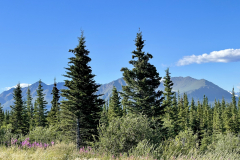 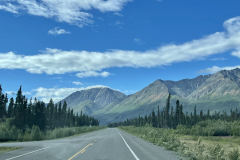 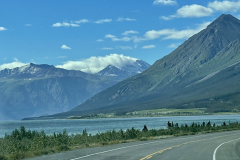 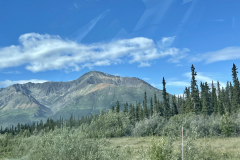 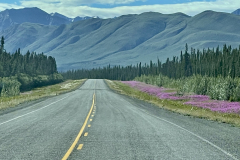 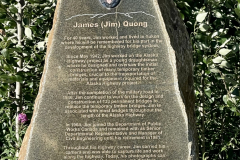 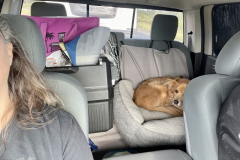 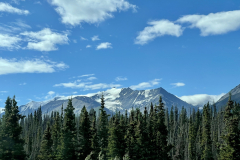 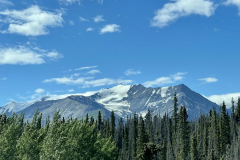 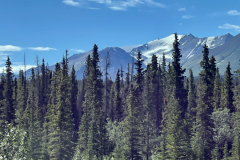 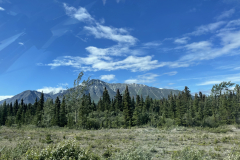 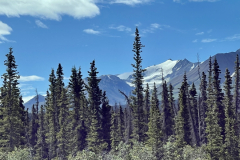 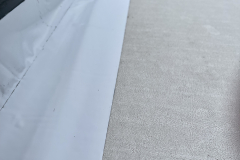 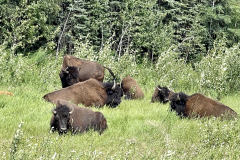 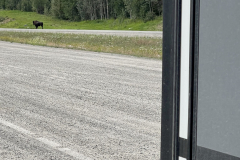 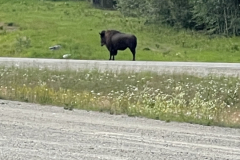 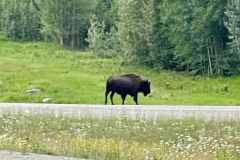 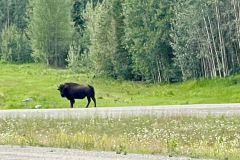 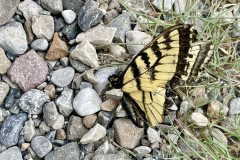 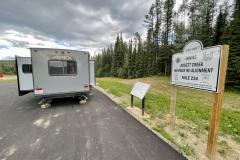 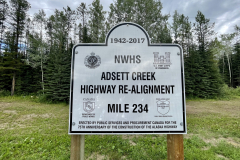