After a restful night at Summer’s Gold Farms and each getting a strawberry shake made from fresh strawberries, Cindy and I were in good spirits as we began our roughly two-hour drive to Whitecourt, Alberta on Friday, July 22, 2022 where we had scheduled five nights at the Eagle River Campground, a First Nation Casino and RV Campground. I had planned to catch up on some blog post writing and some preventative maintenance around both Nomad and Voyager.

But fate had some other plans.

About halfway there, when we were still 113 kilometers (70 miles) from Whitecourt, a car pulled up alongside me and as I cut my eyes over to see what they were doing I saw smoke coming off one of the trailer tires on my side in the outside rear view mirror at the same time as I saw the passenger pointing back to the rear of the trailer. I waved “Thank you” and immediately began slowing down and pulling over to get to the shoulder of the road. We were coming up to the turnoff for Transport Road 660 so I had an extra lane of space between the main two lanes of traffic and the shoulder.

Turned on my flashers and got out, thinking I had experienced a tire blowout. In a way I had, but it wasn’t the tire’s fault. When I knelt down to look the situation over in anticipation of changing the tire, I could see that the leaf spring on the front axle of the driver’s side had broken and part of it was hanging down. The leaf spring holds the axle up and in place (along with some U-bolt shackles) and when it broke the tire dropped down completely and the rubber was worn off until it blew out in pieces.

I could see it would do me no good to change the tire because I could not drive it far enough to get where we were going.

Got back in the cab of Voyager and as Cindy got on the phone with our insurance company for a tow, I began looking for an RV repair shop we could get towed to. The closest one was where we were headed; 113 kilometers to Whitecourt. I spoke with owner Jim Stocks of Canada Certified RV and Trailer Service and he gave me the rundown of charges for travel time, repairs on the road, etc. but in the end he did not have the parts we needed and would not have them until Monday at the earliest. Plus he preferred working on the unit in his shop where he could jack it up high enough to do the work faster than he could on the side of the road.

Cindy was getting the runaround from our insurance company (what else is new?) where it seemed none of their representatives could get it wrapped around their heads that we were in Canada and NOT in the U.S.! I counted four different people she was transferred to while I was looking a tow company that could get us to Whitecourt. Of the eight (8) different tow companies I talked to, only two had a tow truck large enough to take our trailer and neither of them could get to us until the next morning (Saturday) at the earliest.

While we were both sitting in the cab waiting for callbacks, Bella started barking from the back seat at the same time I saw a guy walking up on the passenger side of the truck. I got out and met Terence Tubrett, who asked if we could use any help. I explained that we were waiting for a tow truck and thanked him for stopping. He kind of acknowledged my words and walked back to the side with the blown tire. I showed him the broken leaf spring and he nodded, then said he thought if we changed the tire and I drove very slowly we could make it around the turn from the main highway onto the gravel road beyond the shoulder. Turns out Terence works as an RV Transporter. I was going to get my bottle jack but he said, “I think I have something that will make it easier” and went to this truck to get a 4×4 block of wood with a 45 degree angle cut. He placed it behind my back tire and said if I backed up the trailer onto it we wouldn’t have to use the bottle jack to jack it so high to change the tire. I did and he was right. We got the blown tire off, the spare on and I very gingerly pulled the truck and trailer around the corner to the gravel road so we were off the main road and had some separation from the high speed traffic.

Before he went on his way Terence gave me his card and asked me to email or text him when we got safely to Whitecourt. I thanked him profusely and promised that I would.

The tow company called me and scheduled me for a 10am tow the next morning and I have to say Hannah was very helpful in setting everything up.

Even while we were sitting on the gravel road bemoaning our current state we had another indication that things could have been worse. I stepped out to walk Bella and just ahead of where we had stopped on the main highway (just beyond the turnoff) a car was on fire. We had not heard anything and there were already people stopping to help, along with a fireman in uniform. I thought of grabbing our little kitchen fire extinguisher and running the half-mile or so to see if it would help, but it was obvious they had enough assistance and, for whatever reason, were letting it burn without trying to put it out. Our little extinguisher would not have made any impact on the blaze. Soon the police and a fire truck arrived as well as friends of the driver and before long nothing was left but the burned out husk of car sitting on the side of the road by itself.

We settled in for the night and tried to sleep, waiting for the next morning and our tow truck to arrive. 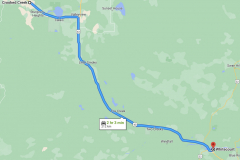 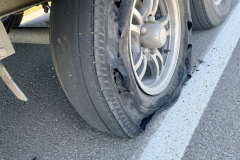 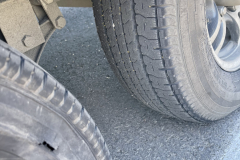 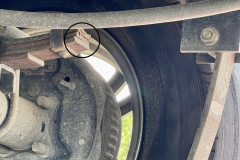 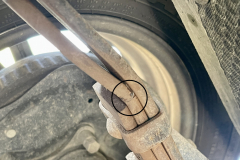 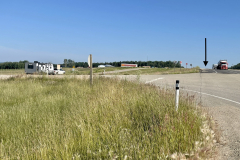 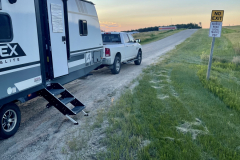 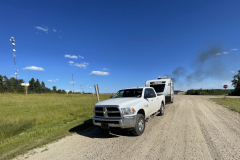 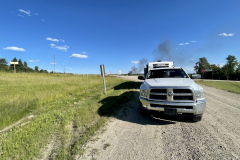 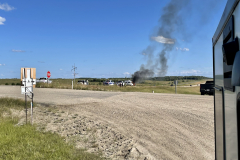 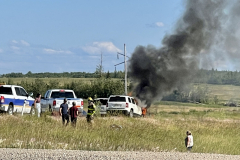 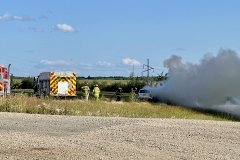