As you might have guessed, we were on time for our 9 am appointment for new Goodyear Endurance tires on Thursday, July 28th, but our tires were not.

The woman at the counter said the tires were on their way and were supposed to be there within an hour, brought by a Rouseneaux truck. We pulled Nomad over to the far edge of their gravel parking lot and waited in the shade, watching every tractor-trailer truck that roared by on the nearby highway to see if we spotted the Rouseneaux logo.

After about 35 minutes a vehicle pulled away from the tire building and drove toward us, the owner of the tire company at the wheel. He said he had just gotten off the phone with the trucking company and the truck had just now left Edmonton enroute with our tires. It would be at least two hours before it arrived, putting it near noon before we would be leaving Whitecourt. He was apologetic, but said he had no control over the shipping company and their issues with staffing and scheduling.

He asked if we’d like to continue to wait or have him put on two comparable tires that he did have in stock and get us on our way in just a few minutes. Cindy and I decided we did not want to wait any longer. But we also did not want to drive down the road with no spare, so we agreed to have the other brand of tires put on. We pulled over closer to the service bay and 3 of his staff came out, removed our tires, put the spare back in place under the tongue and mounted our new tires in less than 15 minutes.

They torqued the wheel nuts down to specifications, but suggested that we stop at the next town several kilometers down the road to have another tire place they recommended re-checked the torque after getting some distance on them. We did and though this new place did not charge us, we tipped the young man who rechecked all the tires and expressed our appreciation for his time.

Then we were back on the road, heading for Irricana, Alberta.

Irricana was nothing more than a stopover of a few days for us. Cindy had made reservations for us at the Founders Park Campground, but we had no plans to visit anything (because there was nothing, lol) nearby. We arrived, got set up and, since neither of us felt like cooking, found a pizza place run by an Asian couple in town about 5 blocks from us. We walked to it, placed our order, and then walked around town for about 30 minutes while we waited for our pizza to be baked. We found several murals on walls around the ares we were walking in.

Though a very small town, Irricana did have a coupe of restaurants, a grocery store, gas station and a post office. The area is a very agrarian community and it reflected its roots with its grain silos and nearby railway tracks and trains.

I particularly enjoyed finding out they were renovating a place called Hotel Irricana. I could not help but sing, “Welcome to the Hotel Irricana” (to the tune of “Hotel California” of course) as we walked around it.

To be honest, I thought the name Irricana was a First Nation name for the community, assuming that it was a native language name for the town. Instead, we found out that it was simply an abbreviation of the words Irrigation Canal because the surrounding land was criss-crossed with irrigation canals to water the agricultural crops.

We had a nice, relaxing stay at Founders Park, which we needed after the broken leaf springs, blown tire and days wait for the parts/tires to repair Nomad.

Next, it was on to one of our favorite planned stops – Vulcan, the home of Spock from Star Trek! 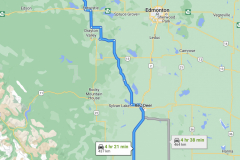 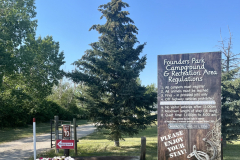 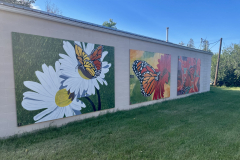 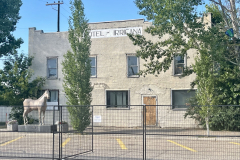 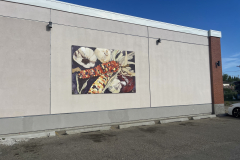 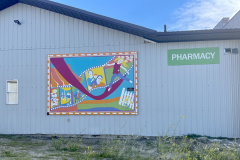 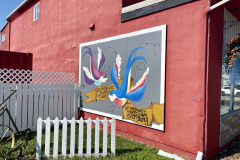 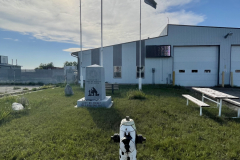 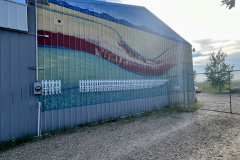 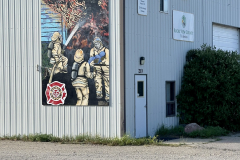 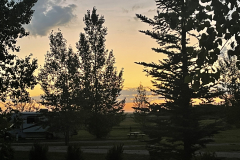