Back many moons ago, when we were planning this portion of our return trip from Alaska, we couldn’t help but notice that we would be driving by the home planet of Mr. Spock of Star Trek. Yes, your intrepid explorers would be making an almost-planetary stop at Vulcan, Alberta, Canada.

On Sunday, July 31, 2022 we left Irricana, Alberta to drive 134 kilometers (83 miles) to Vulcan, Alberta. This is a stop I’ve been looking forward to on our trip because if you know me you know how much I love the fictional universe of Star Trek. That love started with the first episode of Star Trek (now known as The Original Series) in 1966 when I was 11 years old and has continued through today with almost every iteration of the franchise whether it be TV series, movies, or books.

And while most people centered on series lead Captain James T. Kirk (and who wouldn’t want to be the handsome, daring, dashing hero of The Original Series?), I always wanted to be his First Officer, Mr. Spock. Spock, who was cool, level-headed, intelligent, and, some would say, unemotional was the one who I wanted to be like. So a chance to visit a town that used their shared name of his home planet to promote themselves within the Star Trek universe, well that was a visit I wanted to make!

We had a fairly short drive that day and arrived at our planned campsite a little after midday. This place was a first-come, first-served location with limited sites, but we thought we might get lucky and be able to grab a spot. No such luck, lol. It was full and nobody was leaving. Fortunately Cindy had a back-up and we returned to the town entrance on Highway 23 and got a site at a campground behind a huge “travel center” with gas pumps, a convenience store, a restaurant, liquor store and an A & W.

After setting up we walked over to have a late lunch/early dinner at the A & W. Food wasn’t very good (to me) and, amazingly, they had no ice for your soda or tea (which they didn’t bother to tell you until you had placed your order and paid) so that wasn’t fun either. We ate, returned to Nomad and relaxed the rest of the day, making plans to do a walking tour of Vulcan the next morning, Monday August 1, 2022.

Vulcan, Alberta was originally named by a surveyor for the Canadian Pacific Railway in 1915. This surveyor was a fan of the mythical, classical world and named the town after the Roman god of fire. He also named the streets throughout the town after various gods and goddesses. Vulcan lies midway between the major cities of Calgary and Lethbridge in the prairies of southern Alberta. The town’s residential population of less than 2,000 mostly work in farming, as evidenced by the wheat, barley and beautiful yellow-gold fields of canola that surround the area.

But tourism also fuels the local economy these days.

Back in the 1970’s the town erected a concrete “Welcome to Vulcan” sign on their main thoroughfare of Highway 23. This didn’t mean a whole lot to residents, but soon Star Trek fans were stopping by to take their picture in front of the sign so they could say they had “been to Vulcan.”

Around the same time, the Government of Alberta was trying to encourage community engagement through a rural initiatives program and the town of Vulcan wasn’t doing well in that regard— they needed something that would draw people in. The association with Star Trek wasn’t universally loved by its residents, but the fans were already coming, so they thought why not embrace it?

A man named Pat Wisener and other members of the community decided to form the Vulcan Association for Science and Trek (or VAST). And in the 1990s, the association with the Star Trek franchise started taking a more concrete shape with the Vulcan Starship landing just outside of the town in 1995. The result was on June 10, 1995, Vulcan, Alberta took a major step towards developing its own brand of space tourism when the town unveiled Vulcan’s Starship FX6-1995-A, replica of the Starship Enterprise, named after Vulcan Airport’s designation FX6.

The Starship is 31 feet in length with the primary saucer hull being 15 feet and the height of the entire ship is 9 feet with a total weight of 5 tons. The supporting base is also 9 feet in height and requires 40 cubic yards of concrete to provide sufficient underpinning to hold the Starship aloft.

Then in November 1995 a former Vulcan Administrator suggested creating a space-themed tourist station for their visitor center in order to tap into the ever-growing Star Trek tourist market. The idea quickly grew into a group effort between V.A.S.T (Vulcan Association for Science
and Trek), the Vulcan County Economic Development , Vulcan & District Chamber of Commerce and the Town of Vulcan. The Trek Station’s official grand
opening was on October 23, 1998. The Station was designed to look like a 53 foot high landed spaceship and contained almost 3,000 square feet of space within.

I can tell you that it is pretty impressive to see both of these structures in person, as well as exciting for a Star Trek fan such as myself.

We had a fun morning visiting both of the above, as well as the billboard with faces of some of the more famous Star Trek characters cut out so you could take photos with YOUR face in them. We also walked through the town visiting various sites like the Bust of Spock that Leonard Nimoy placed his own handprint in while he performed the “Live Long and Prosper” finger spread sign, the Transporter Room, Space and The Old Frontier (who better than me?) garden and all the various murals around town.

If you’re a Star Trek fan, I’d highly recommend a visit to Vulcan, Alberta if you have the opportunity. 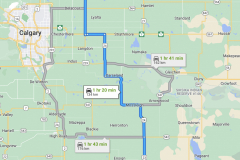 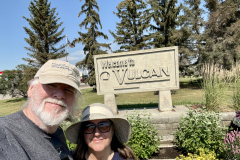 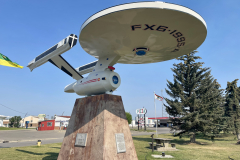 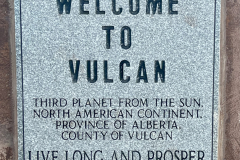 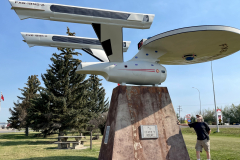 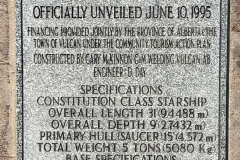 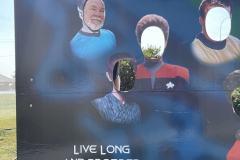 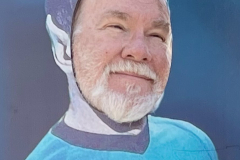 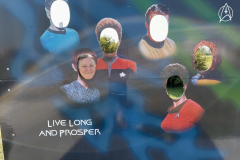 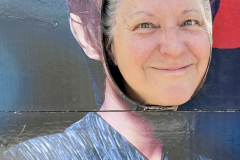 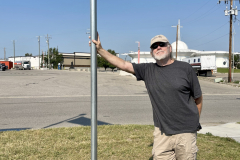 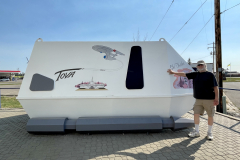 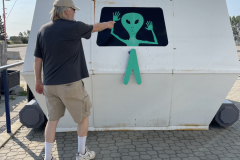 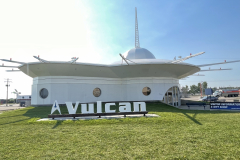 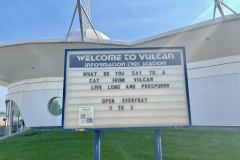 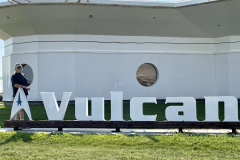 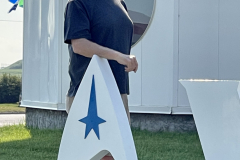 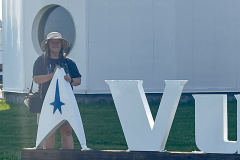 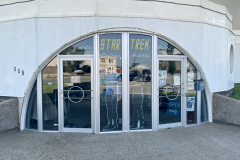 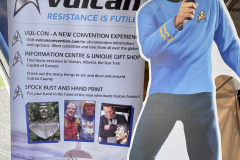 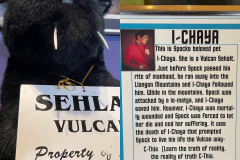 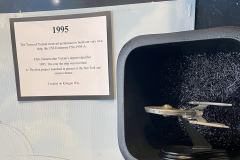 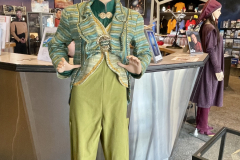 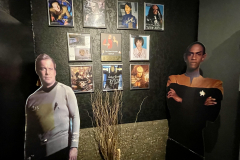