Sunday, September 18, 2022 we left the Stillwater Campground in the Arapaho National Recreation Area just outside of Granby, Colorado and drove to Pueblo, Colorado for a one night stay. On the drive down past Denver/Colorado Springs we found out we had just missed Cindy’s cousin Darla and her family, which was a shame. Next time we need to coordinate better.

The Sunday night in Pueblo was to break up our trip and to pick up the new propane regulator for our dual-tanks on Nomad early Monday morning. We usually do one night stays in Walmart parking lots, but the Walmart in Pueblo does not allow that. We found a place near Walmart called Big 5 Sporting Goods that said we could stay overnight in their parking lot. Before this I’d never heard of Big 5, but we ended up seeing several of them in other parts of Colorado and New Mexico.

We arrived there around 5pm and went inside looking for something to buy in order to patronize them in return for our stay. Then we walked over to a nearby Barnes & Noble where Cindy picked up a couple of books. We ate dinner and settled in for the night.

We’ve overnighted before, as I mentioned above, at Walmarts, at rest areas, at simple pull-offs on the sides of highways and I’ve never felt uneasy. But this stay had me on alert most of the night. Earlier, when I was walking Bella over in a grassy area near where we were parked, two homeless people came walking toward our trailer until I stepped into view and then they veered off and away. I made sure they saw me and I let Bella growl at them so they would know that there was someone with a “vicious” dog staying inside. I watched them walk over behind an old bank drive-in building and stare at me. I stared right back. Eventually they walked over to another part of the complex’s parking lot and out of sight.

Later, in the dark, I took Bella out again and saw the same two people and a third standing next to the old bank drive-in building and watching in our direction. I decided to sleep in the living room that night in one of the recliners, but didn’t end up getting much sleep. In addition to the ones I had seen already, throughout the night different homeless folks were walking through the parking lot, some getting closer than needed to Nomad and Voyager. But none ever bothered us and I never really thought anyone would, I just wanted to be vigilant.

So, after a mostly sleepless night, we got up Monday morning, had breakfast and were at the RV supply place when they opened their doors at 8:30 am to get the regulator. Then we were off to Cochiti Lake and their campground about 20 miles south of Santa Fe, New Mexico. The drive down was very scenic. We never fail to find and enjoy beautiful sights as we wander across the country.

Cochiti Lake is a nice campground on the edge of the eponymous body of water. It’s on a reservation between Santa Fe and a small town called Peña Blanca. The loop we stayed in had water and electric hookups and the sites were fairly level. The worst part was that the grassy areas were full of sand spurs and they were SHARP! We had to pick them off our shoes before we went inside Nomad; otherwise they fell off on the floor and bare feet or sock-only feet would get stabbed by the nasty little buggers. We even got out Bella’s boots so she could go potty in the grass without being stuck. But she hates wearing those things and clomps like a horse in them. It’s a funny sight to see, but Cindy says I hurt Bella’s feelings when I laugh so I try not to do so.

I installed the new regulator, but it made no difference in the furnace running like it should. I talked to the mobile RV tech we used in Colorado and he suggested a couple of other things that I’ll try.

Mostly we spent the week relaxing and walking around the campground with Bella, checking out the other loops. We’ll be back at this campground next April, so we were looking at other sites that might be more level or offer a nicer view of the lake.

On our next to last day there we drove into Santa Fe to run some errands, pick up some food, gas up Voyager, etc. Cindy found out Trader Joe’s had all their pumpkin spice products out, so we had to go there as well so she could stock up on the (supposed) pumpkin goodness. We treated ourselves to lunch at Panera and ended up spending 7 hours taking care of various things we needed to do. 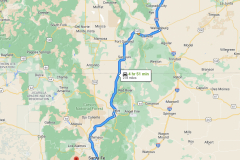 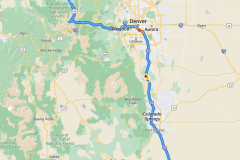 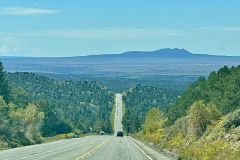 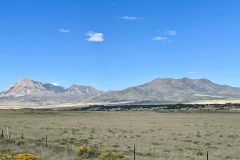 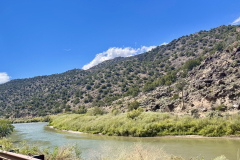 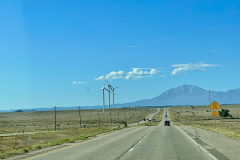 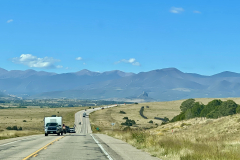 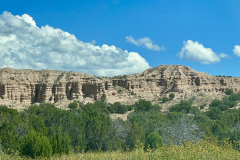 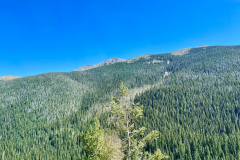 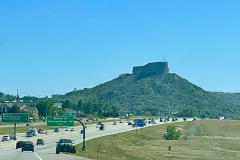 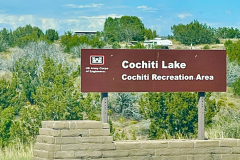 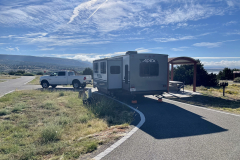 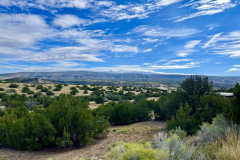 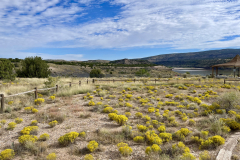 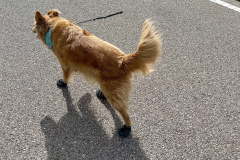