Sunday, July 24 to Thursday, July 28, 2022 we were waiting for the new leaf springs to come in and doing some things around Whitecourt and our campground.

Sunday we went to pick up some groceries and stopped at a restaurant called Original Joe’s where we were told we could get authentic poutine. This was our first time trying poutine and we wanted to get the real thing. Back a few years ago when we went to an outer for our anniversary we were going to get some, but the restaurant we ate lunch at didn’t serve it so we missed out on it then.

My impression was “It’s Ok.” It tasted alright, but not enough that I would be sure to order it anywhere I went, like I do with onion rings. Cindy’s feeling was that it was like mashed potatoes with gravy and a little cheese.

Our palettes are so unrefined.

Monday the parts we needed had still not arrived so we did some walking around the campground with Bella. Eagle River Campground is part of the First Nation’s nearby Casino and Travel Center in a heavily forested area off the main highway. We had already been warned that a bear had come out of the nearby tree line and killed a doe and fawn the previous week, so we were careful to avoid that particular area. And I carried our bear spray with me, just in case.

Jim, the owner of Canada Certified RV and Trailer Service came by in the afternoon and got up underneath Nomad to be sure he could do a “blocking” so that we could tow Nomad into his shop when the parts arrived. This involves placing thick blocks of wood between the axel and broken leaf springs allowing me to pull Nomad the 8 kilometers to his shop, going no faster than 20 mph. He declared that he could and would return in the morning when the parts were now supposed to be in.

I also wanted to replace my blown tire with another Goodyear Endurance tire. After talking with Cindy, we decided we would replace both tires on that side. I checked online and a Fountain Tire franchise in Whitecourt carried them. I drove up there but they did not have them in stock. I was promised that they could have them in by 9 am the next morning, which would work for our schedule. Since the parts had not come in we knew we’d be staying an extra night.

And that nearby casino I mentioned earlier? Well, Cindy wanted to go and try to win some money to make up for the towing, parts and tire so we stopped in there Monday evening and she gave it a shot. This was just not her night so 90 minutes later and $50 poorer, we called it a bust and returned to Nomad.

Tuesday the parts arrived at Canada Certified RV and Trailer Service. Jim came out and “blocked” the underside and after tearing down our set-up I sloooowwwwllllly drove to his shop. Driving no faster than 20 mph and flashers going, I made a lot of drivers on the 70 mph highway mad, but it was that or do more damage to Nomad. We left Nomad with Jim and his crew, went to grab some lunch and then took Bella to a very nice park nearby.

About 3 hours later Nomad was ready for us. The original leaf springs were rated 1,500 pounds each for a total of 6,000 pounds. Nomad weighs more than 7,000 pounds empty. Anyway, after talking it over with Jim I had decided to upgrade to a more durable set of leaf springs and the new ones are rated for 6,000 pounds EACH and are comprised of 6 leafs instead of 4 like the original ones. We drove back to the campground and set everything back up again. I called Fountain Tire and learned that the tires had not come in as promised, but if it came in Wednesday as promised we could get them installed on Thursday morning as we left Whitecourt for our next stop.

Wednesday we gave Bella a much needed bath using the outdoor shower. She looked SO pitiful during the bath, but afterward when she was dried and brushed she looked and smelled much, much better. We also did our laundry and got Nomad cleaned up inside for our trip the next morning.

Oh, and the tires STILL had not been delivered to Fountain Tire, but I was assured they would be there Thursday morning in time for our departure.

How do you think THAT turned out? Find out next time and thanks for following the Wandering Wetheringtons. 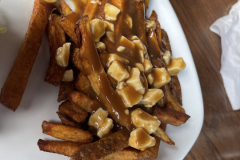 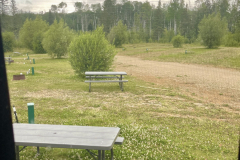 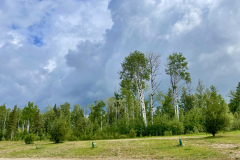 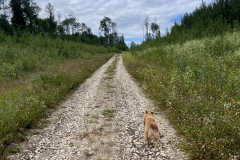 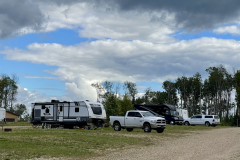 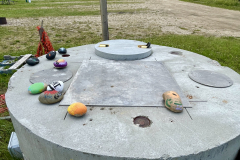 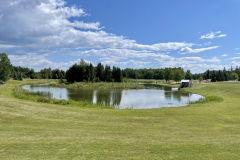 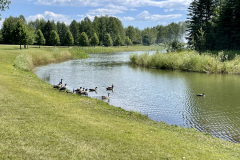 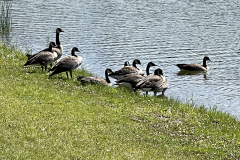 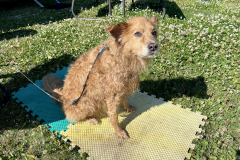 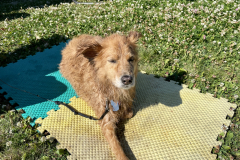 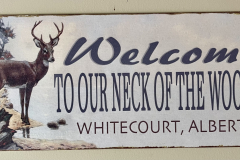