Tuesday morning, August 23, 2022 Cindy and I were up and out the door at 6 am to get an early start on our first visit together to Yellowstone National Park. Cindy was here once when she was 6 or 7. I was here several years ago when I was working in the area. We were looking forward to seeing and enjoying it together. On top of that, we were visiting during the park’s 150th anniversary year.

Yellowstone National Park became the nation’s very first National Park on March 1, 1872 by the signature of President Ulysses S. Grant. The park is made up of 2.2 million acres of land and contains about half of the world’s active geysers. A large portion of Yellowstone is known as the Yellowstone Caldera, a large crater that is formed by a volcanic explosion and the collapse of the volcanic cone. Yellowstone’s Caldera measures approximately 43 by 28 miles and was formed by supereruptions that took place 2.1 million years ago, 1.3 million years ago and 640,000 years ago.

Yellowstone sits on top of a huge magma chamber, which accounts for the constant bubbling that we saw both in the paint pot areas and the more active geysers like Old Faithful. As I pointed out to Cindy, if there was a supereruption while we were there we’d be vaporized instantly or we’d hope we were. “Thanks Mr. Positivity” she said.

But thats not so much out of the realm of probability: According to Wikipedia; “In October 2017, research from the Arizona State University indicated prior to Yellowstone’s last supereruption, magma surged into the magma chamber in two large influxes. An analysis of crystals from Yellowstone’s lava showed that prior to the last supereruption, the magma chamber underwent a rapid increase in temperature and change in composition. The analysis indicated that Yellowstone’s magma reservoir can reach eruptive capacity and trigger a supereruption within just decades, not centuries as volcanologists had originally thought.”

On that happy thought, we wanted to get there early so we could beat the crowds and I’m glad we did. By the time we left around noon the places we had stopped to see were packed and cars were parked on the side of the road, filling up those particular attractions. Our goal on this day was to see the paint pots and geysers, including of course Old Faithful.

We passed through the West Entrance gates around 6:30 am, just as the sun was coming up. The park ranger offered us maps and wished us well.

I’m going to give a big shout out to the National Park Senior Lifetime Pass. I got mine five years ago for $29 and the following year the cost went up to $80. Even if I had paid $80 it would have been one of the best deals ever for someone older than 62 who visits a National Park as little as three more times in their life. Daily entrance fees run $25 to $35, but we are able to enter at no charge for as many days as we like at as many parks as we can visit. Even if you don’t travel as extensively as we do, the savings are amazing.

When I was here several years ago there was a flat, open area a couple of miles past the entrance that was filled with bison. I mean scores, if not hundreds, of bison grazing and walking and being photogenic. I got here early in the day for that visit as well and there were 20 or so vehicles stopped and people taking photos. I excitedly told Cindy about that because she really wanted to see some more bison. But alas, the field was completely barren of ANY kind of wildlife. I felt like I had raised her expectations, only for them to be dashed on the empty field.

But we DID get to see some elk grazing near the edge of the road on our way to the paint pots, so there was at least that.

The different paint pots and fountains were pretty amazing to see, especially in the early-morning fog and mist. Harder to see until the sun shines down from above is the vibrant and different colors that result from the bubbling of rock, microbes and bacteria.

After walking and seeing the different paint pots and fountains we headed over to the Visitor Education Center and Old Faithful where we joined about 700 of our closest friends to watch the country’s most famous geyser shoot off right on schedule. Cindy said that when she was here at the age of 6 or 7, seeing Old Faithful was the only thing she remembered, but it was even cooler this time with me there.

Ok, not really, but she WOULD have said that if she had thought of it.

As I mentioned earlier, we drove back the same way we came and could not believe how crowded the areas of paint pots and geysers were. The regular parking lots were full and people were just stopping on the side of the road and walking a mile or more to see them. We were SO glad we came early and avoided those crowds.

Next up: Day Two at Yellowstone National Park. 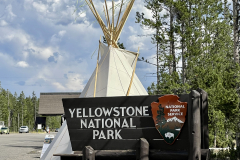 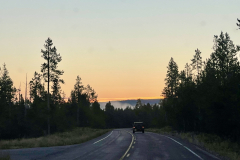 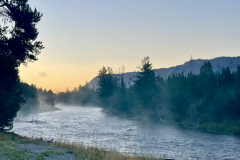 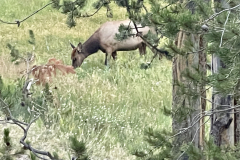 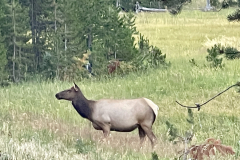 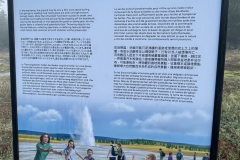 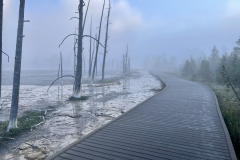 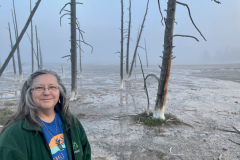 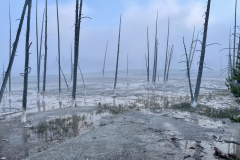 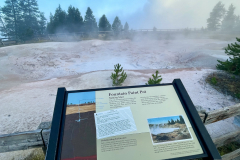 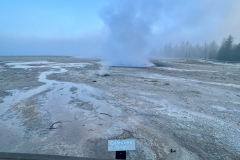 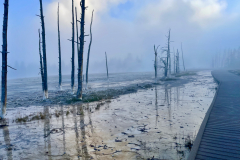 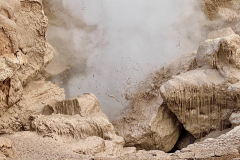 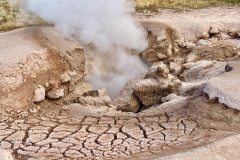 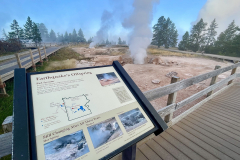 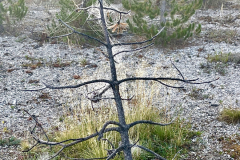 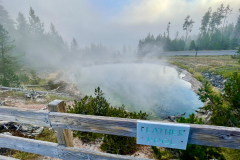 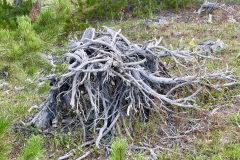 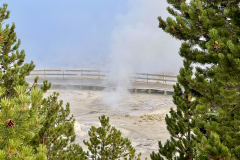 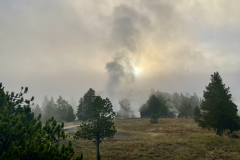 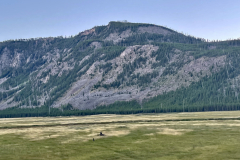 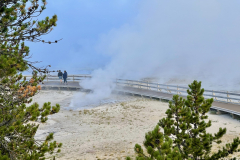 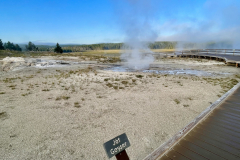 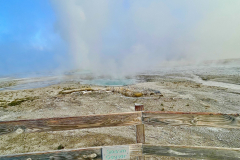