When we arrived at Under Eight Flags Campground the previous day, the campground manager gave us some information on a nearby grocery store and Truck/RV Wash (both Nomad and Voyager were filthy from our drives through Canada and Alaska). She also told us about the Writing-on-Stone Provincial Park and their hoodoos (a tall, thin spire of rock usually formed by erosion) which was 42 kilometers (26 miles) away from the campground. It sounded interesting and Cindy and I are always interested in learning more about Native American and First Nation (Canada) people and their histories.

So Thursday morning, August 4, 2022 we decided to take a drive to visit Writing-on-Stone Provincial Park and attend a 10 am guided tour of the hoodoos. When the campground manager told us about the park, she pointed to the North and East. When we put it in our GPS it said we needed to go South and East. The GPS is supposed to tell us the fastest route, so we began following it.

When it brought us to the middle of a wheat or barley field 45 minutes later on a dirt road and said “Your destination is on the right” in her perky, happy voice and all we could see was miles and miles of grain waving in the wind, we knew we were NOT at our destination.

We pulled out one of our iPhones, put in the location and about 25 minutes later Siri announced we had arrived but we already knew that because we could see the sign. Unfortunately, we were 30 minutes late for our 10 am guided tour and missed that. I love modern technology, but sometimes it fails. The funniest thing is that several hours later when we were ready to leave, the GPS took us a totally different way back that was a straight shot on paved roads West and South, bringing us back to the North end of Milk River. If we had just gone that way in the morning we would have arrived in plenty of time for our guided tour.

As it was, we now had to do our own tour with guide books and hiking across the mountains and rocks. We started with a stop at the Visitor Center to get a background on the Blackfoot people and carvings and paintings that give this place its name. Then it was time to start hiking.

Writing-on-Stone Provincial Park is located in the Milk River Valley and straddles the Milk River itself. It is one of the largest areas of protected prairie in the Alberta park system, and serves as both a nature preserve and protection for many First Nations rock carvings and paintings. The park is sacred to the Blackfoot and many other tribes. Writing-on-Stone Park contains the greatest concentration of rock art on the North American Great Plains.

Evidence suggests that the Milk River alley was inhabited by First Nations people as long as 10,000 years ago. The petroglyphs (rock carvings) and pictographs (rock paintings) are depictions of life for the Indigenous people who view this area as a spiritual place. Understandable when you see the hoodoos and other rock formations. The Blackfoot tribe probably created many of the carings and paintings, but other First Nations tribes, such as the Shoshone also travelled through the valley and may have created some of the art. The towering cliffs and hoodoos had a powerful impact on those native tribes and they believed that they were the homes of powerful spirits.

We took lots and lots of photos, but unfortunately time, wind, and even the angle or intensity of the sun make many of the pictographs difficult to see in person as well as in photos.

We only went a mile and a half in distance (according to the trail information) but the ups, downs and squeezing through tight spots made it feel more like 5 miles. And the temperature was in the high 80’s with the sun beating down us us relentlessly. We’re getting too old for this, lol.

Several hours later and with almost all of our water consumed, we made it back to the Writing-on-Stone Provincial Park campground where I bought Cindy a coke to drink while I hiked/ran the rest of the way up the mountain to the truck in the parking lot and drove back down to pick her up from a shaded picnic table in the campground.

We took the rest of the afternoon and evening to recuperate and relax, but we won’t soon forget our hike through Writing-on-Stone Provincial Park. 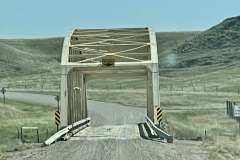 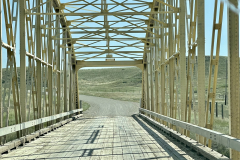 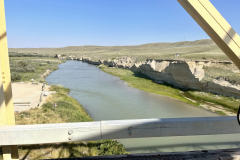 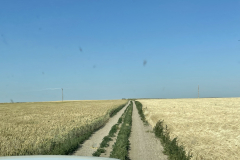 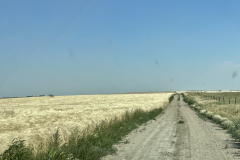 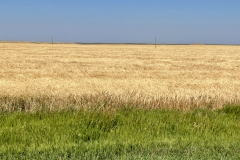 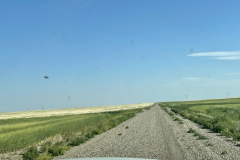 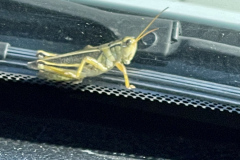 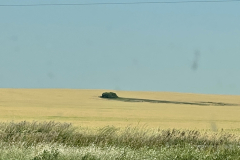 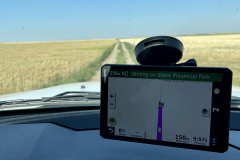 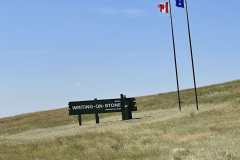 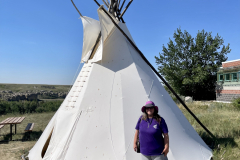 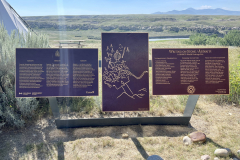 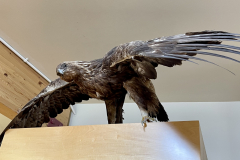 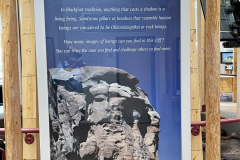 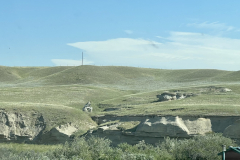 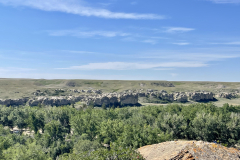 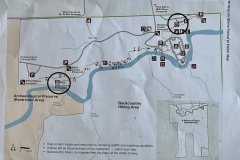 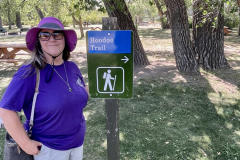 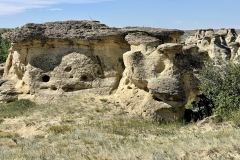 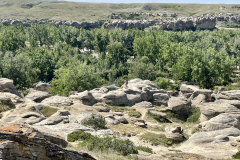 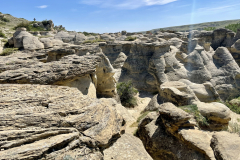 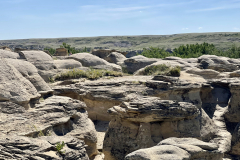 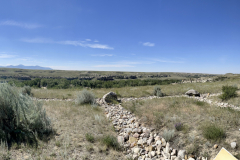